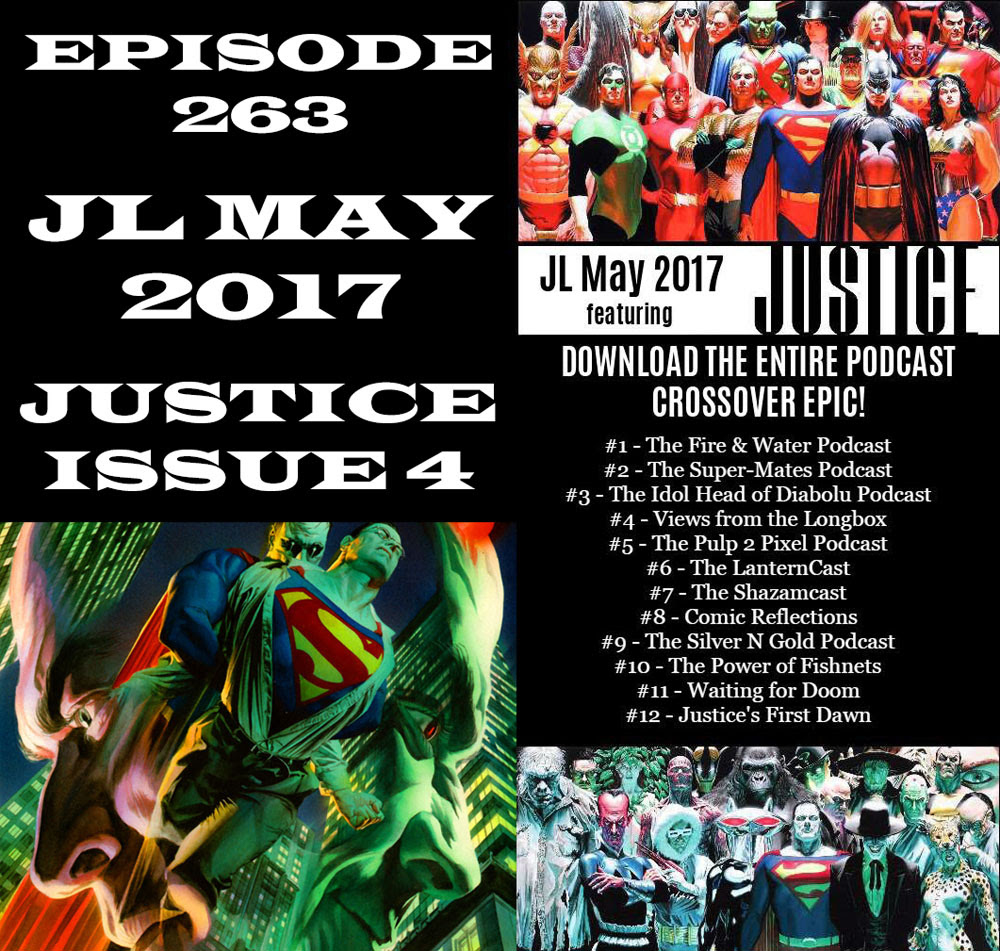 Once again I find myself part of an epic podcasting crossover and once again it involves the Justice League.  JL MAY 2017 is all about the 12 issue maxi-series Justice and I am lucky enough to be part of it.  This leg of the crossover covers the fourth issue, where things go very wrong for the heroes of the Justice League while the Legion of Doom makes their case to humanity.  Superman getting a beat down...the role of villains in the DCU...Wonder Woman's mission...creepy stuff happening in Ollie's bedroom...all this and more is covered in this episode.  I also go over the DC Direct figures that sprang out of this series because what is more exciting than an audio medium talking about visual items? 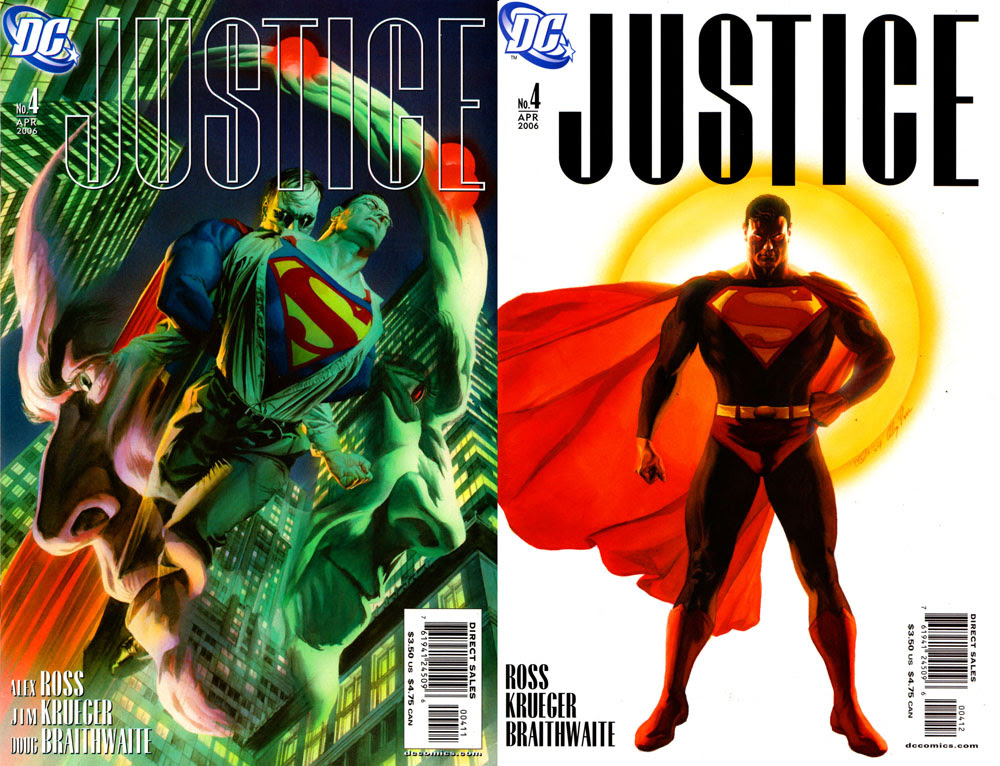 During the course of the episode I reference a past episode of this show and the seventh episode of Dorkness to Light.  On those episodes Alan Middleton, Em Middleton and I talk about Kingdom Come.

And here is a full list of of the shows taking part in this year's JL May 2017!

Next Episode: No idea, but it will be swell!

Posted by Michael Bailey at 7:18 AM 4 comments: 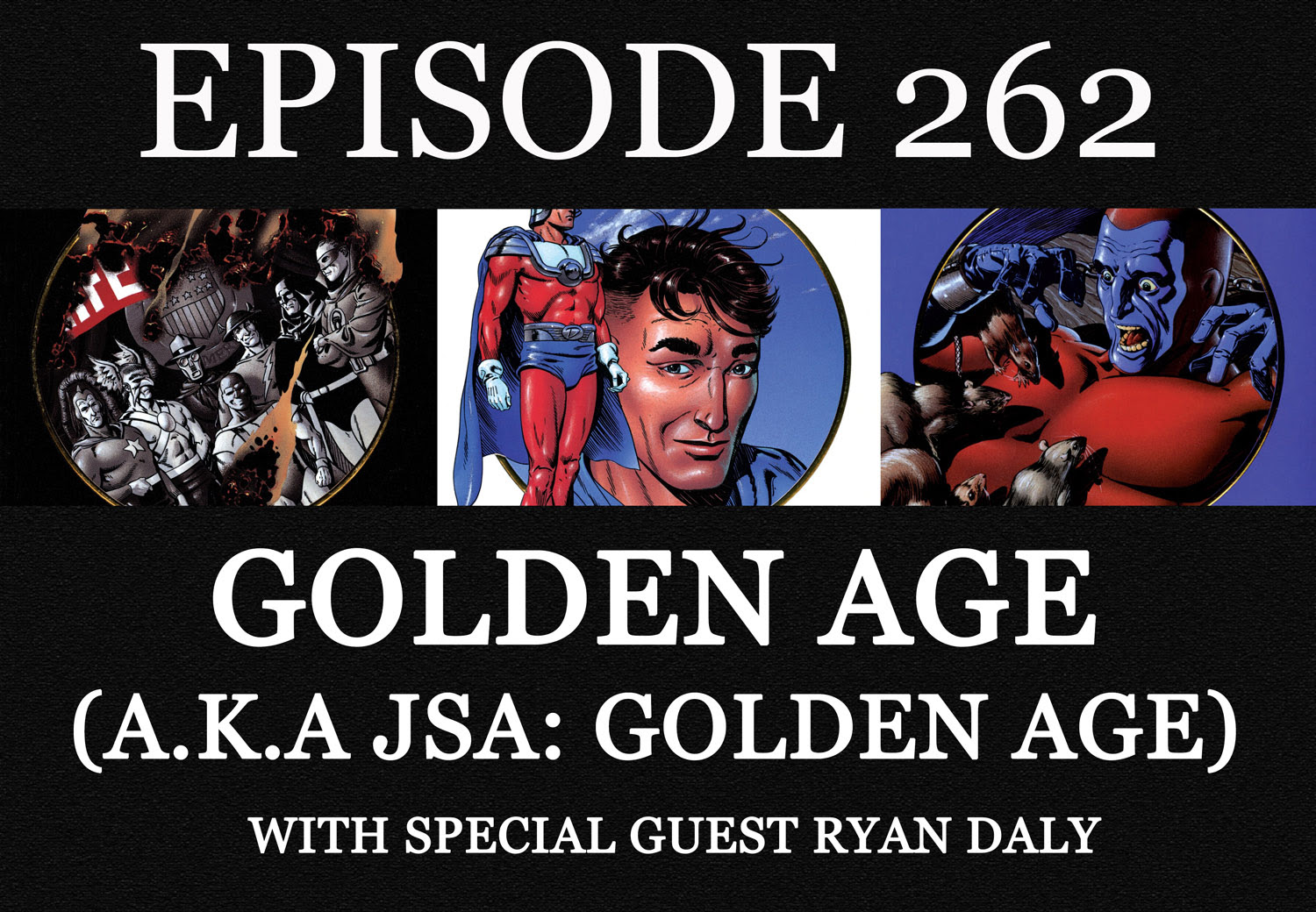 This time out Ryan Daly stops by to talk about the DC Comics mini-series Golden Age or, as it is commonly called now, JSA: The Golden Age.  This was a four issue Elseworlds story that took place after World War II and showed what happened to the members of the Justice Society and the All-Star Squadron in a post war America.  One of those heroes, Tex Thompson, becomes a major mover and shaker but what is his ultimate goal?  Listen in and find out what Ryan and I thought about the characters in this story and the story itself.

Ryan hosts or co-hosts a number of shows over at The Fire and Water Podcast Network.  There's Gimmie Those Star Wars, Batman: Knightcast, Power of Fishnets: The Black Canary and Zatanna Podcast, It's Midnight...The Podcasting Hour and the ended but still awesome Secret Origins Podcast.  Check out all of those shows because they are the awesome.

During the feedback section I mentioned Tom Panarese and the podcasts he produces.  Pop Culture Affidavit can be found at it's home base or over on the Two True Freaks site.  You can also find In Country at both of those sites as well.  Be sure to listen to Tom's Origin Story series because it's really good.

Next Time: No idea.  I'll have something but at the moment I am not quite sure what it is. 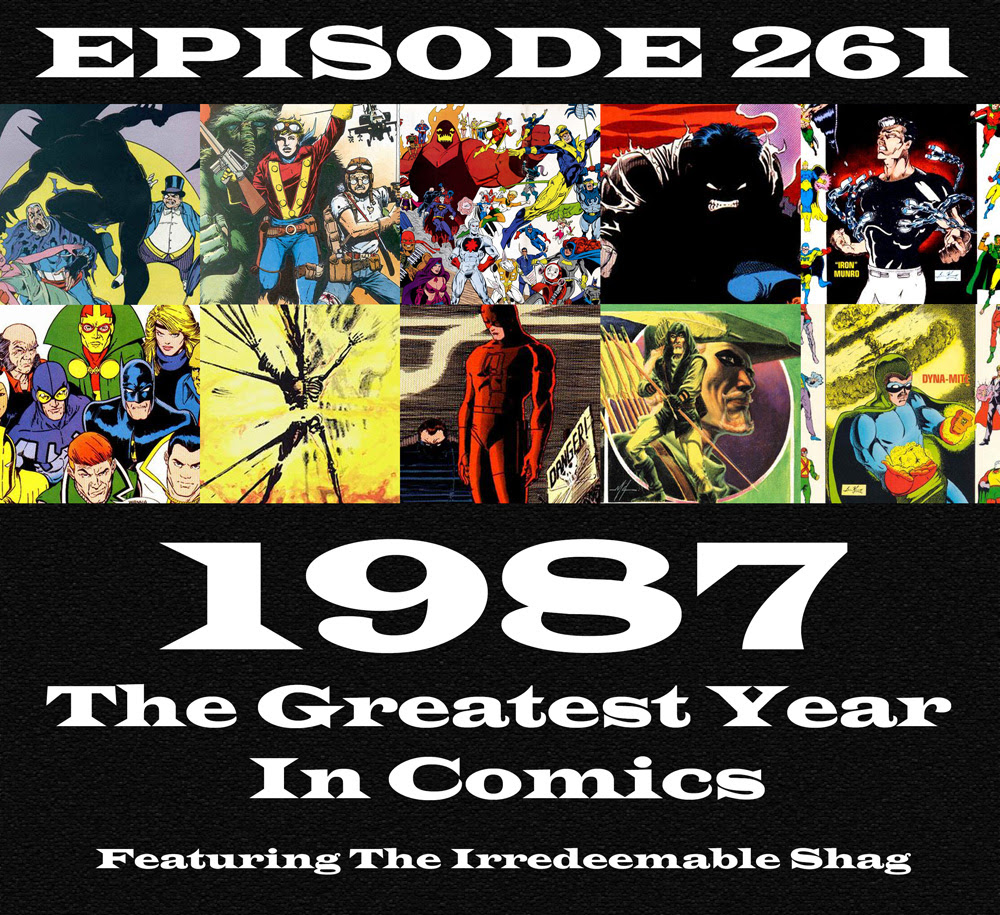 This time out I am joined by my first semi-regular co-host The Irredeemable Shag to talk about the greatest year in comics.  Now your mileage may vary but for my money and Shag's money you really can't beat 1987 in terms of the sheer awesome that came out during that year.  From Airboy to Firestorm to the Justice League to Peter David on the Hulk to Young All-Stars to the Longbow Hunters '87 was packed to the rafters with amazing four colored fun.  Shag and I discuss all of those series and stories plus others and even have a lightning round that goes beyond the five main choices we...chose.

Don't tell him I said that.  He'll think I like him.

Next Time: Ryan Daly stops by to talk about James Robinson and Paul Smith's The Golden Age!

Posted by Michael Bailey at 11:43 PM No comments:

I also announce the new podcast Andy and I are putting out, which begins its run in May!

During the episode I read an email from Ryan Daly and mentioned the awesome show he co-hosts with Chris Franklin called Knightcast.  You can find that over on the Fire and Water Podcast Network site by clicking here.  On the same network you can find Ryan's amazing Secret Origins Podcast, which you can get to by clicking here.

While I'm pimping stuff check out Robert Meyer's podcast Robin: Everyone Loves the Drake over at The Batman Universe.

And be sure to subscribe to Andy's various podcasts, which include The Fantasticast, Hey Kids Comics, The Palace of Glittering Delights and Listen to the Prophets: A Deep Space Nine Podcast.

Next Time: The Irredeemable Shag stops by to discuss the greatest year in comics...1987!

Posted by Michael Bailey at 6:00 AM No comments: 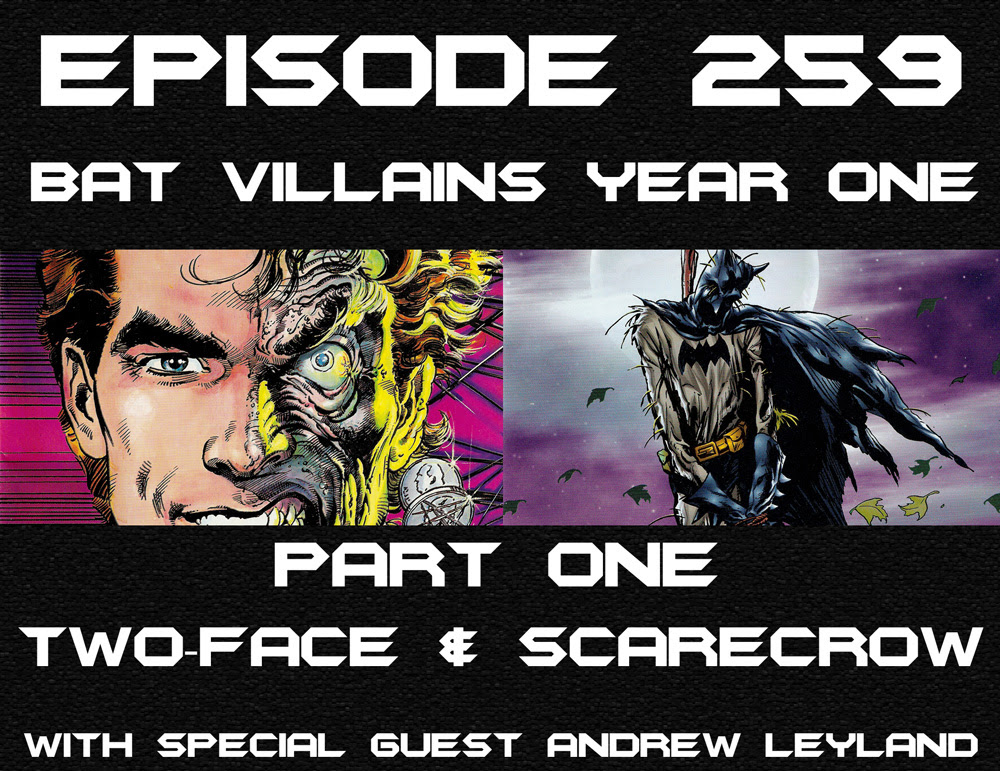 From the vaults of the Fortress of Baileytude comes a lost episode of a show that is now done and dusted.  Back in 2015 Andrew Leyland and I sat down to record a two part episode of Bailey's Batman Podcast that was supposed to be part of a larger series of episodes focusing on Year One stories.  The first part of that series that didn't involve Andy never happened for various reasons and the audio just sat there until I could figure out what to do with it.  I figured that the time to release this audio is now since I am gearing up for a relaunch of sorts later this year.

There was a theme to the annuals DC Comics published in 1995 and that theme was Year One.  The idea was to tell stories set in the character in question's early days.  Batman already had a Year One, Two and Three so instead of rehashing his early days the powers that were decided to focus on the villains.  Andy and I thought it would be fun to dig into those stories (with two exceptions) but before we dug into those we hopped back to 1990 and read Batman Annual #14.  That annual told was all about the origin of Two-Face and had a narrative style very similar to Batman Year One.  More than anything it was a damn good story so we wanted to talk about it.  From there we discussed Batman Annual #19, which detailed the origin of the Scarecrow!

Be sure to tune in next time for the official announcement of the new podcast Andy and I are starting up in May!

Speaking of Andy and podcasts be sure to check out his other shows including Hey Kids Comics, The Palace of Glittering Delights, Listen to the Prophets: A Deep Space Nine Podcast and The Fantasticast!

Also, if you want to hear the episode of the Lonely Hearts Romance Comics Podcast that my wife Rachel and I appeared on just follow this link!

Next Time: More origins of the Bat Villains and possibly a sidekick as well!

Posted by Michael Bailey at 11:37 AM No comments: 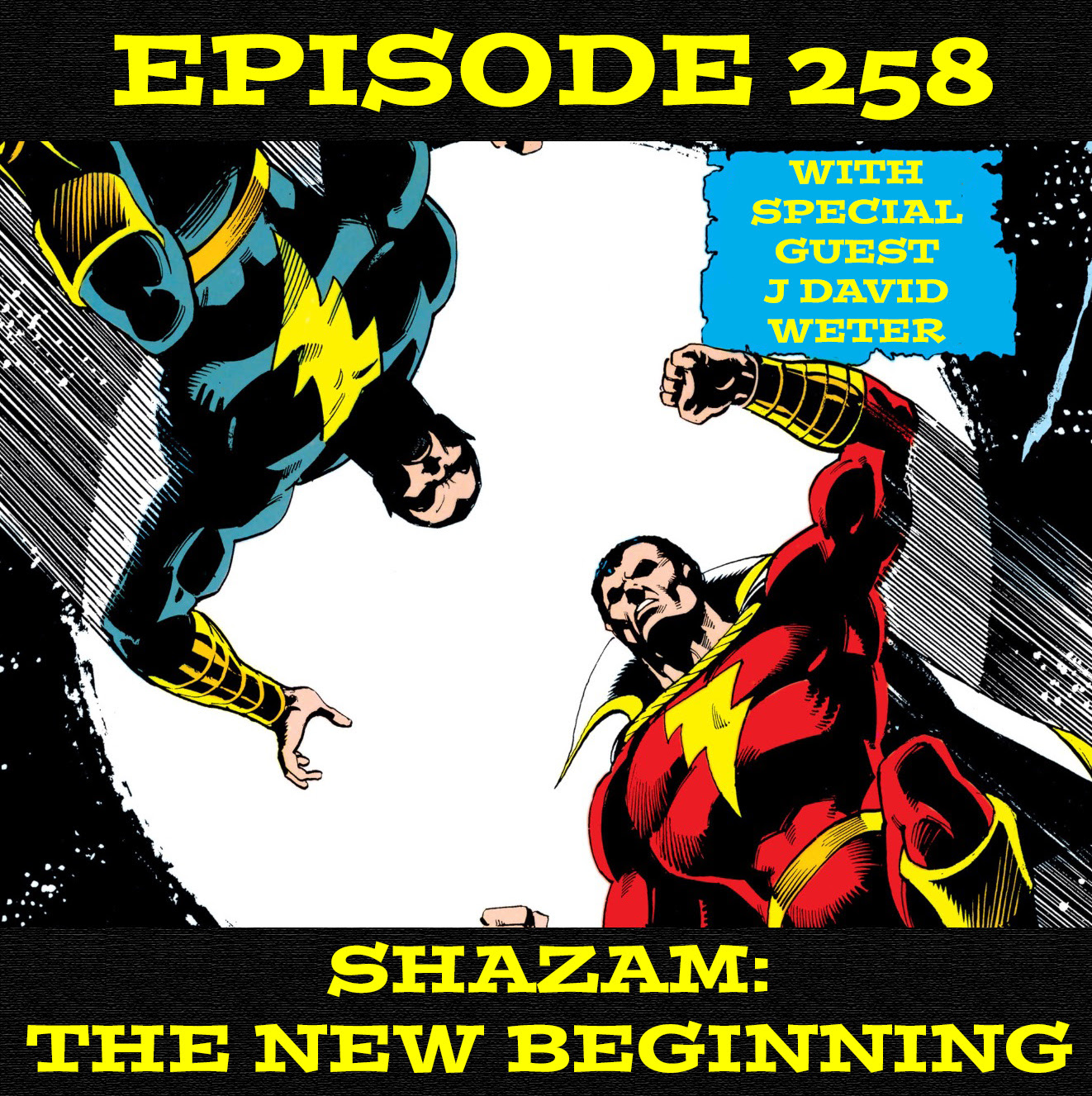 This time out I deliver an epilogue, of sorts, to my Legends series by looking at the four issue mini-series, Shazam: The New Beginning.  Once again I am not alone.  Joining me to talk about Roy and Dann Thomas' Post Crisis revamp of the Big Red Cheese is J David Weter, but we can call him Dave.  After going over our histories with the character we dive into all four issues and discuss the writing, the art, why Billy would have been a fan of the Transformers, Black Adam's ears and I throw in some Johnny Cash music for good measure. 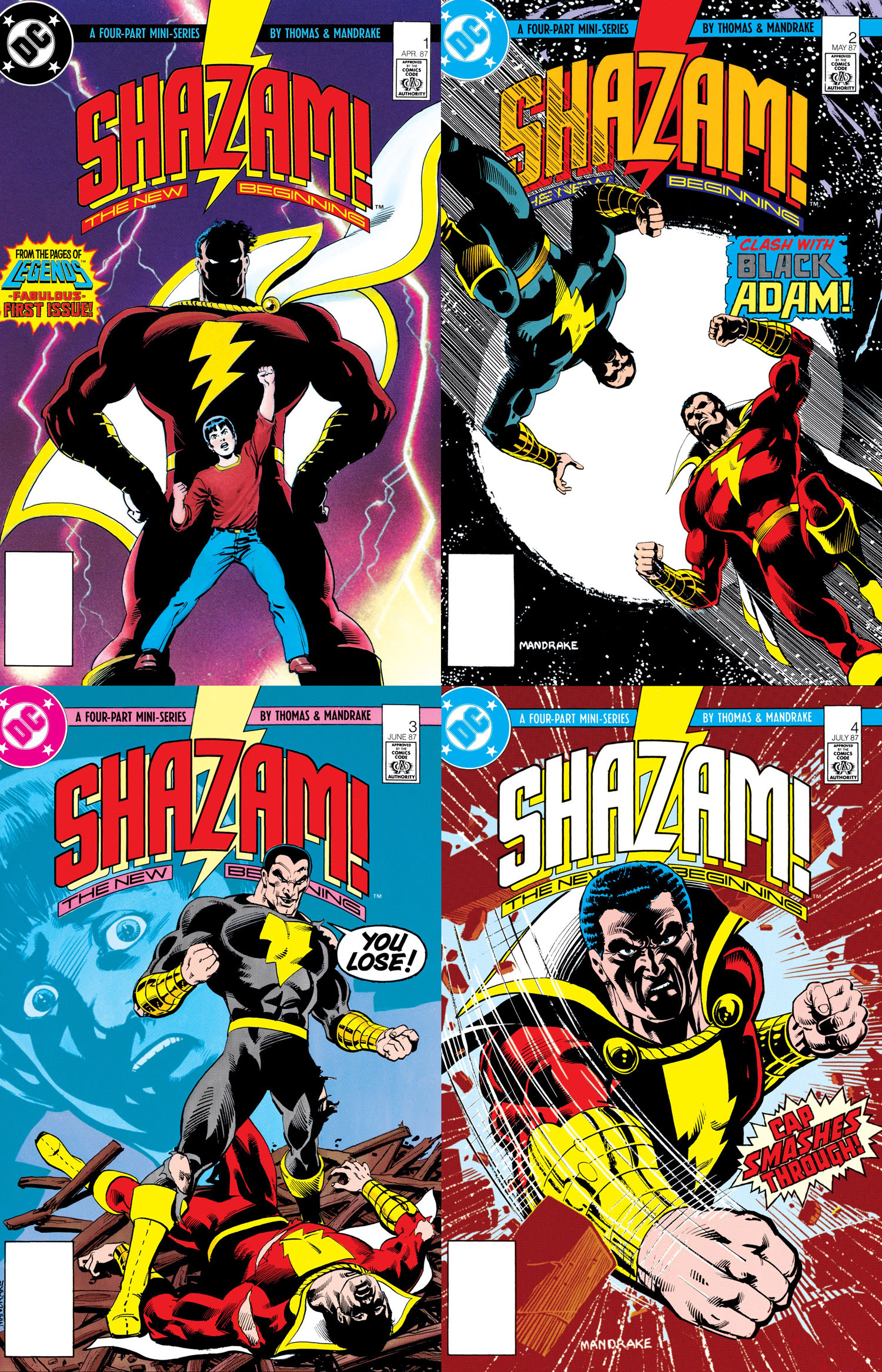 Many thanks to Dave for coming on the show!  Be sure to check out his podcasting goodness over on Two True Freaks.  Also keep an ear out for The Dave Cave, his upcoming Silver Age Batman podcast!

Next Time: I haven't decided yet.  It might be a lost episode or I might throw something together based on the Patreon suggestions! 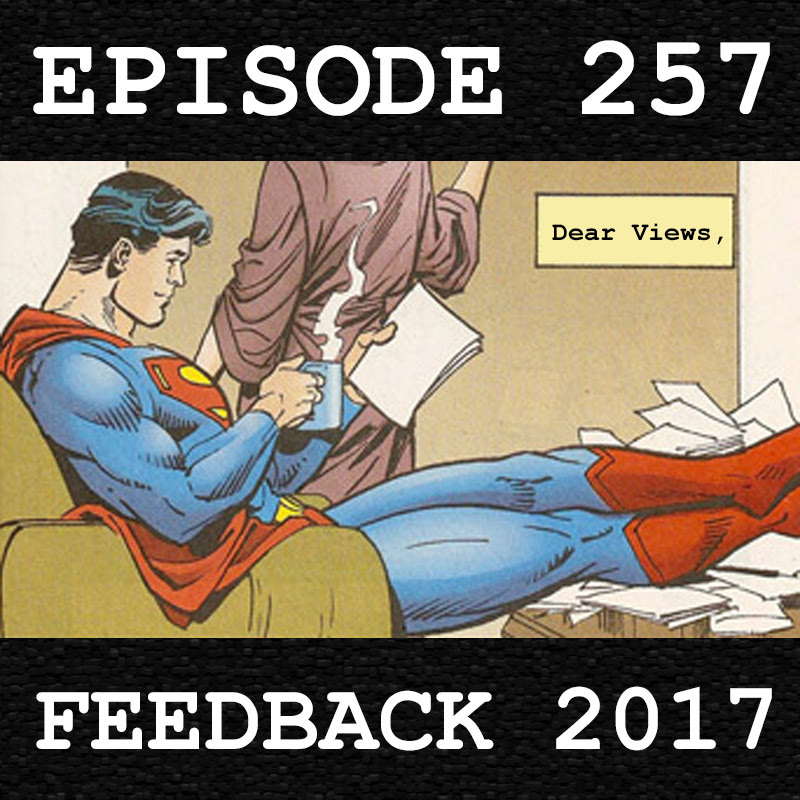 This time out I have an all feedback episode where I read your emails and iTunes reviews!  Past episodes are touched upon and question are asked and answered.  More than anything I wanted to dedicate an episode to everyone that took the time to write and email and leave an iTunes review.

There are some major announcements about the future of Views on this episode.  There is also information about the Patreon thing that I set up and for more information on that please check out this link to see what that's all about.

I mean I go over it all in the episode but I like to give people options.

During the episode I mentioned a few podcasts or rather people did the sensible thing and mentioned their podcasts.  Be sure to check out Gene Hendrick's various web stuff over at The Hammer Strikes.  Chris and Cindy Franklin are up to no good over at the Fire and Water Podcast Network.  Patrick Corcoran teams up with his father on Make Dad Read Comics.  Shawn Merek and his wife Jen talk about comics from the '70s, '80s and '90s over at Worst Collection Ever.  Tom Panarese has a bunch of shows over at Two True Freaks.  Professor Alan Middleton and Em Middleton are also up to no good over at the Relatively Geeky Network.

That should cover it.  If I have forgotten anyone I apologize.

Finally, here is the bit of art that Michel Fiffe did for Copra Vs. #2.  I was touched that the thing people use to wind me up could end up in a comic.  Be sure to check out Michel's site and his comics because he is awesome. 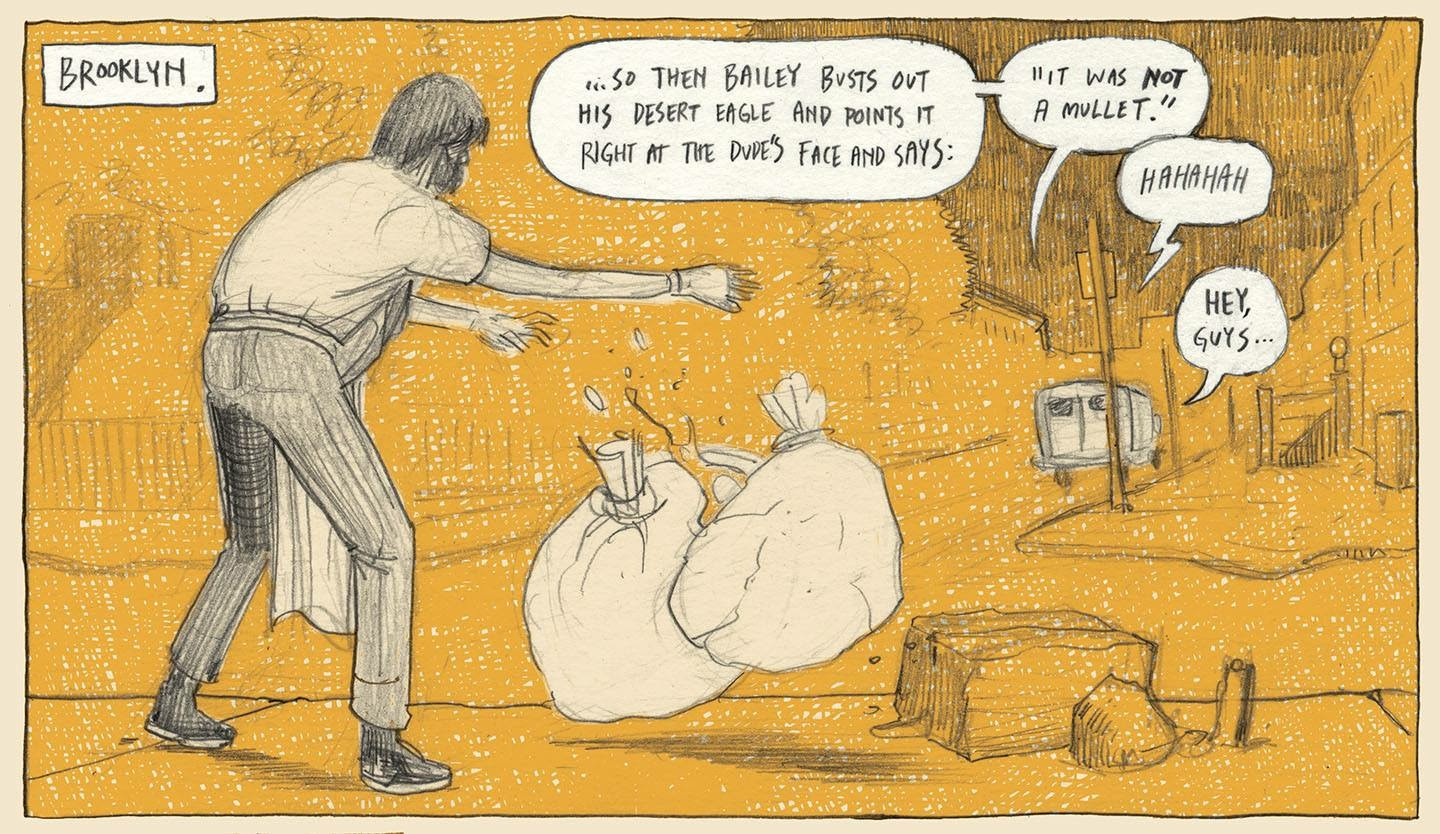 Next Time: Dave Weter drops by to do a follow up episode to my Legends coverage.

Posted by Michael Bailey at 6:00 AM 3 comments: 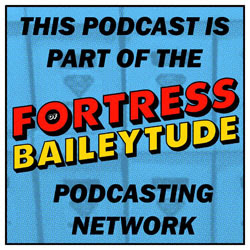